The nipple/areola area consists of the central projection, known as the nipple, and the coloured circular dish shaped component, the areola. Although, essentially, the function of the nipple/areola complex is for breastfeeding, it is also of course one of the most sensitive areas of the female body.

Nipple and areola surgery are becoming increasingly popular in both women and men. Many factors have contributed to an increased demand for corrective or aesthetic surgery. These include the prevalence of images of the female body on TV, in magazines and on the internet, and of course on the beach too, where the site of topless sunbathers is now commonplace.

Disproportionately large areolas can be associated with large, saggy breasts, or with conditions such as tuberous breasts. Women and men with overly large areola or nipples can often be unhappy with the appearance of their bodies. Pregnancy and breastfeeding can also contribute to the formation of overly large areolas. ‘Normal’ areolas are 3.5 – 4.5cm in diameter and circular in shape. Sometimes the areola can be oval or irregular in shape. Expanded areola can be associated with gynaecomastia (enlarged breasts) in men and can be corrected in conjunction with the gynaecomastia procedure.

Women with inverted nipples can have problems breastfeeding, or may wish to have the inversion corrected purely for aesthetic reasons. Normal nipples in men vary in size, shape and level. Excessively protruding nipples can rub against clothing causing discomfort, or may show through clothing. These are among the reasons our patients request nipple reduction.

Nipple inversion is typically classified into three groups; Grade one, is where the nipple can be pulled inwards, but at other times protrude. A “shy” nipple can point out in cold temperatures such as cold water, or can be brought out with some massage or stimulation. Grade two inversion means the nipples naturally invert, although can be pulled outwards, allowing it to sit in an everted position and appear to stick out. Once released, the nipple will gradually sink back in to an inverted position. In Grade 3, true inverted nipples are present from birth, and do not protrude with cold or stimulation. These nipples are so inverted to the underlying breast tissue that they cannot be pulled outwards. This is usually caused by a connection to the underlying tissue, ligaments and skin. Ligaments along the milk ducts, which connect to the nipples, are shorter and pull the nipple in towards the breast tissue.

If nipples become inverted later in life, or after breastfeeding, the cause can be that the skin of the breast has become looser and more relaxed around the nipples, making the nipples to appear to be inverted.

If a previously ‘normal’ nipple suddenly becomes inverted, it is important to see your doctor, as this could potentially be serious.

Before and After photos 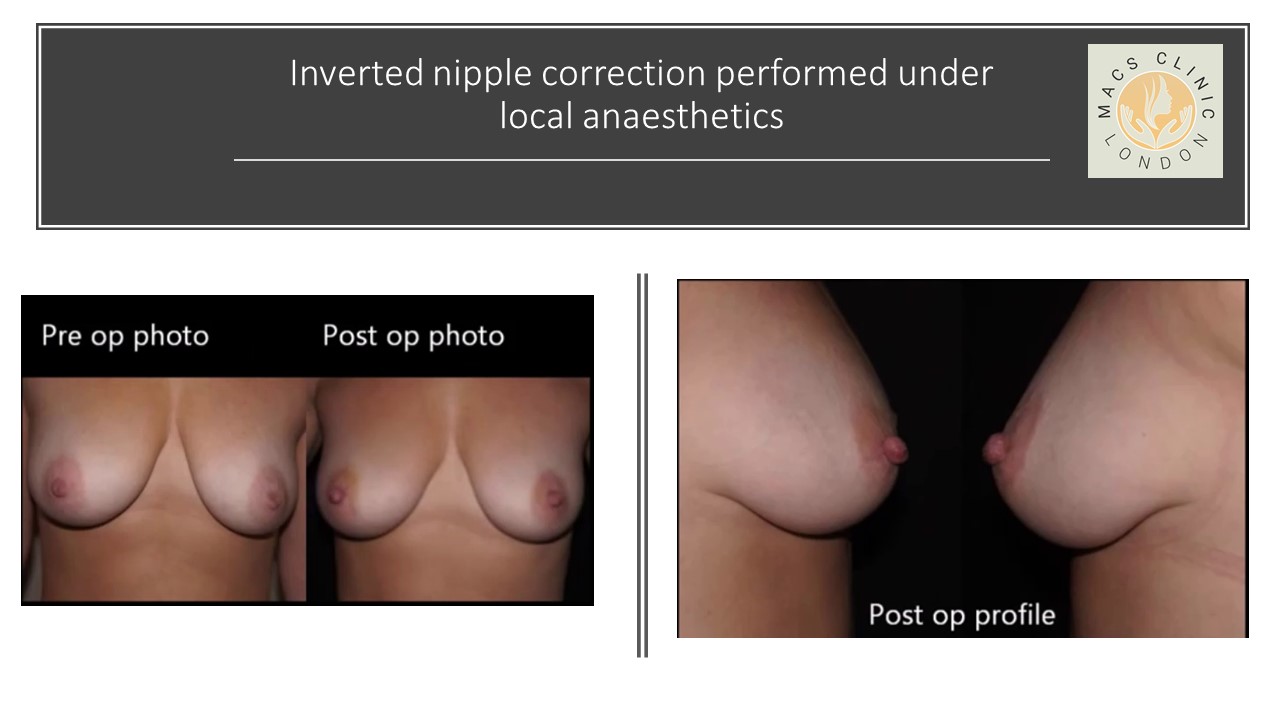 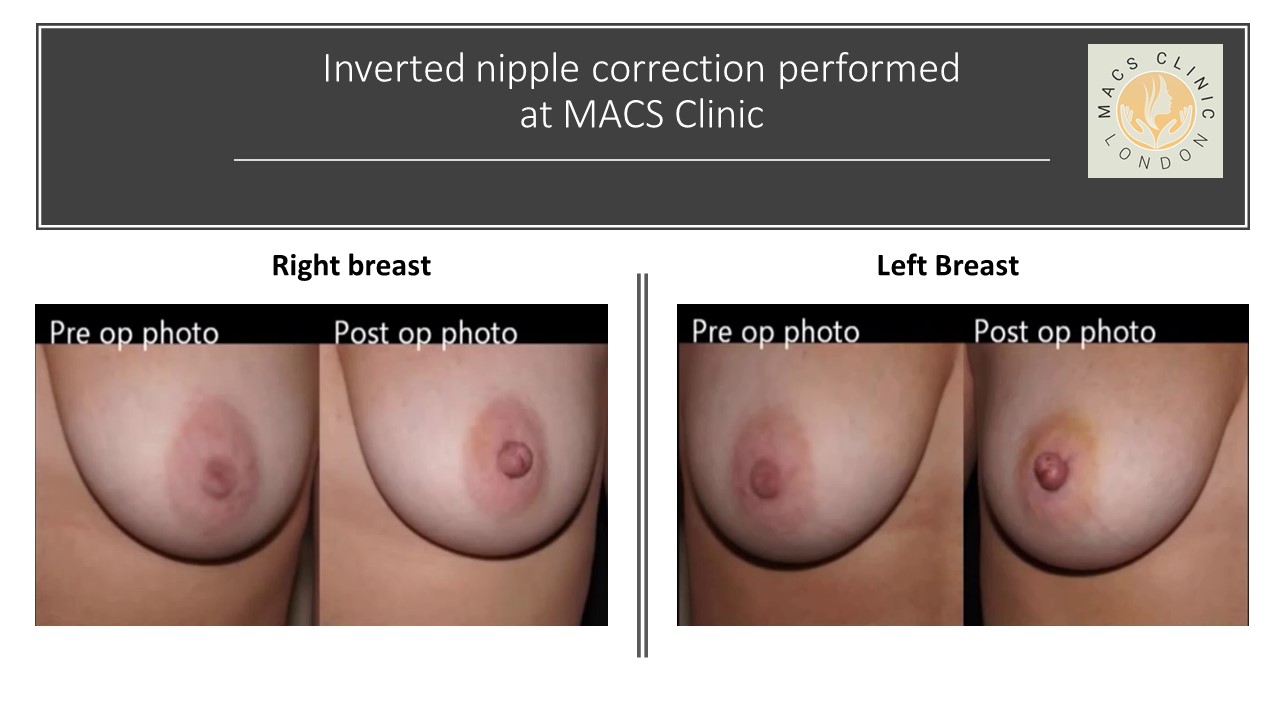 How long does corrective surgery take?

Nipple reduction, areola reduction and the correction of inverted nipples are relatively simple procedures. They can be performed under local anaesthetic and generally take less than one hour.

How long is the recovery time?

Because these procedures are performed under local anaesthetic, the recovery time is relatively short. You should take things easy for a week or so after the surgery; but don’t stop moving altogether! Take short walks and resume other gentle and sensible activities that won’t leave you feeling exhausted or raise your blood pressure.

Will I have stitches?

The newly shaped nipples or areola will be held in place by a series of dissolvable stitches and a special ‘purse string’ suture is used to avoid stretching of the scar.

What are the possible complications?

As with any surgery, it is important to consider the possibility of complications occurring. These can include scarring, infection, bleeding, wound healing problems, altered sensation, asymmetry, under or overcorrection, hyperpigmentation, hypopigmentation (dark or light scar), and the possibility of revision surgery.